Thinking of dirndls stirs pictures of peasants in idyllic rural scenery but also for sure the famous Oktoberfest. However, I will take you on a journey showing that they are a phenomenon with urban origin, starting as early as in the midst of 18th century! The journey begins with a bestseller: Julie or the new Héloïse.

Jean-Jacques Rousseau’s all sales record-breaking book caused a hype due to its descriptions of the natural beauty of the Swiss countryside and the Alpine scenery in general. What it could not describe were dirndls as we wear them today. Simply because they did not yet exist, neither in Suisse nor in the rest of the Alpine region. 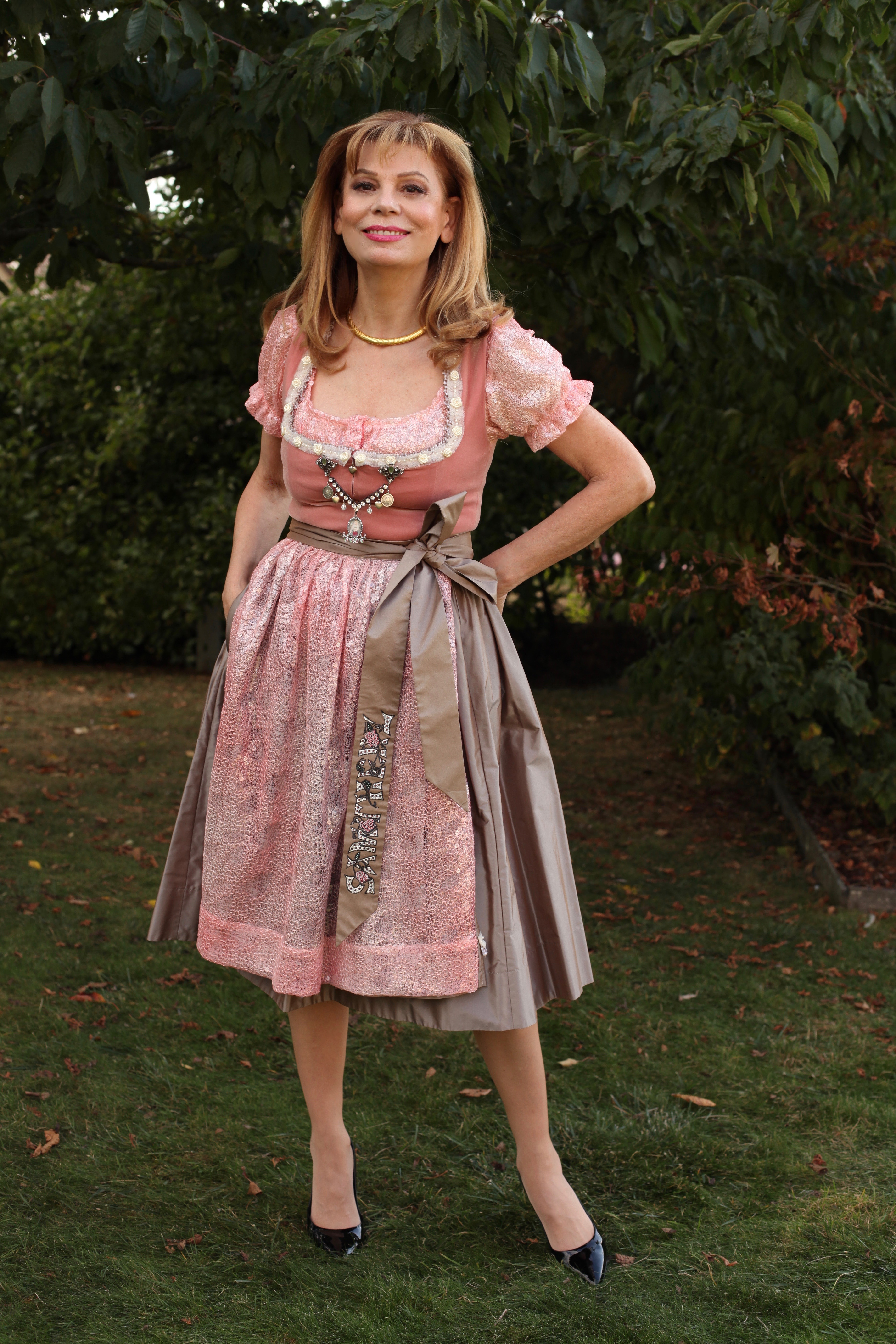 Interestingly enough, the novel’s year of publication, 1761, marked the peak of Rococo style with the Marquise de Pompadour (1721-1764) as its fashion beacon. Did she read the bestseller? For sure she did! Did she meet the author? Although possible, she did not.

Perhaps Rousseau’s story about a young women of noble origin falling in love with a man beneath her social status was less inspiring for someone thinking through right down to the last detail her way into the bed of King Louis XV! Many paintings depict Madame de Pompadour in commonly known courtly 18th century’s fashion style: a two-piece dress composed of a tight fitting laced top and a hip accentuating wide skirt – producing an incredible slim waist line – and deep plunging neck lines.

Interestingly enough, the novel’s year of publication, 1761, marked the peak of Rococo style with the Marquise de Pompadour (1721-1764) as its fashion beacon. Did she read the bestseller? For sure she did! Did she meet the author? Although possible, she did not.

Perhaps Rousseau’s story about a young women of noble origin falling in love with a man beneath her social status was less inspiring for someone thinking through right down to the last detail her way into the bed of King Louis XV!

Europe’s 18th century court fashion style served as the basis for the late 18th century dress à la Tyrolienne. Worn by courtly society at the countryside, when taking a time-out from courtly etiquette, it purported to resonate with the call “back to nature” – wrongly attributed to Rousseau – by disavowing court’s artificiality and instead praising nature’s simple authenticity. But for the emergence of the “almost-dirndl” we still have to wait another century.

It was around 1870/1880 when the urban upper class took summer breaks in rural resorts, and dressed itself in what it perceived as matching rural attire. Half a century further down the road, it is finally dirndl time. Designed in the thirties of the last century, the dirndl took up court’s style – although now as a one-piece. Madame de Pompadour would have for sure admired its close-fitted bodice.

However, not sure is what she would have said to the then introduced short puff sleeves and the raised hemline. Yet certainly being a sponsor of Voltaire – another influential Enlightenment thinker during 18th century – she would not have appreciated the reasoning behind the designer’s changes. 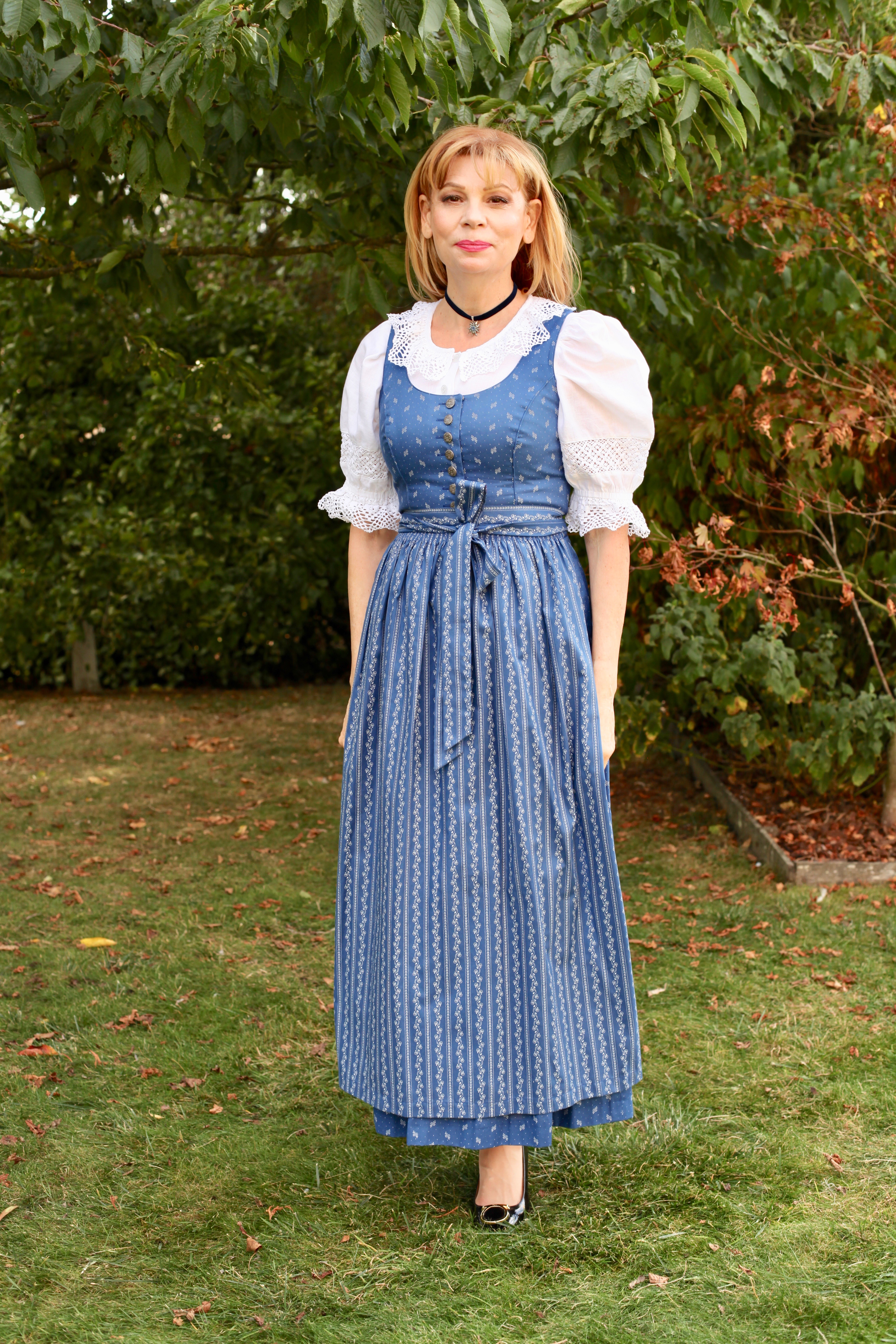 A Traditional Dirndl in White and Blue

With its white and navy blue, this by ten densely placed grey metallic buttons knotted dirndl is as Bavarian as it can be. Both colours dominate Bavaria’s two official flags: the striped type, and the lozenge type. The exact origin of the lozenges is disputed; some believe them to be representative of the lakes and rivers of Bavaria, or perhaps the sky, as in the Bavarian anthem which says “the colours of His sky/heaven, white and blue”.

This cotton fabric dirndl sticks with the design of the thirties as it of 7/8 dress length – perfect also for tepid temperatures – but deviates from it as it has medium-length puff sleeves. To emphasise the Bavarian aspect, I wear it with a white cotton blouse and classic mid-heel black patent leather shoes.

I tie the bow of my apron right in the middle. I know that there is wealth of different opinions telling you to watch out as right, left, centre would reveal your relationship status. I suggest to let it be just a matter of your personal taste and to trust your choice. 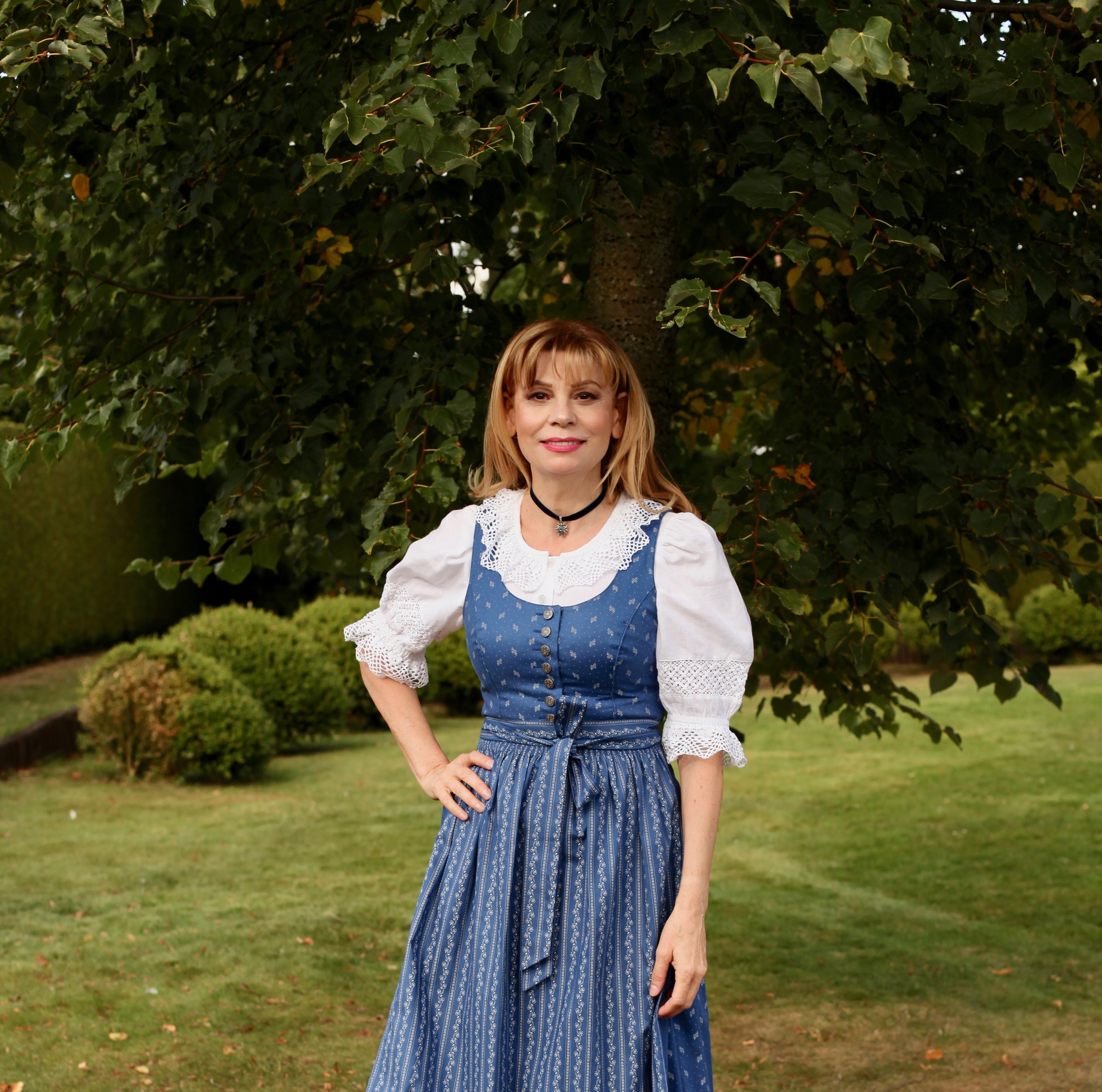 Dirndl accessories include for sure necklaces. The most traditional is a special type of choker, in German called “Kropfband”. It is said to origin in the Austrian region of Salzburg where iodine deficiency caused the pathological growth of the thyroid gland. Since the 19th century women have been seen wearing a band covering the goiter (struma) or the scars from surgical removal.

Fortunately I wear my choker just for fun. It is a simplified version in the form of a black velvet adorned with an Edelweiss, the mountain flower per se. 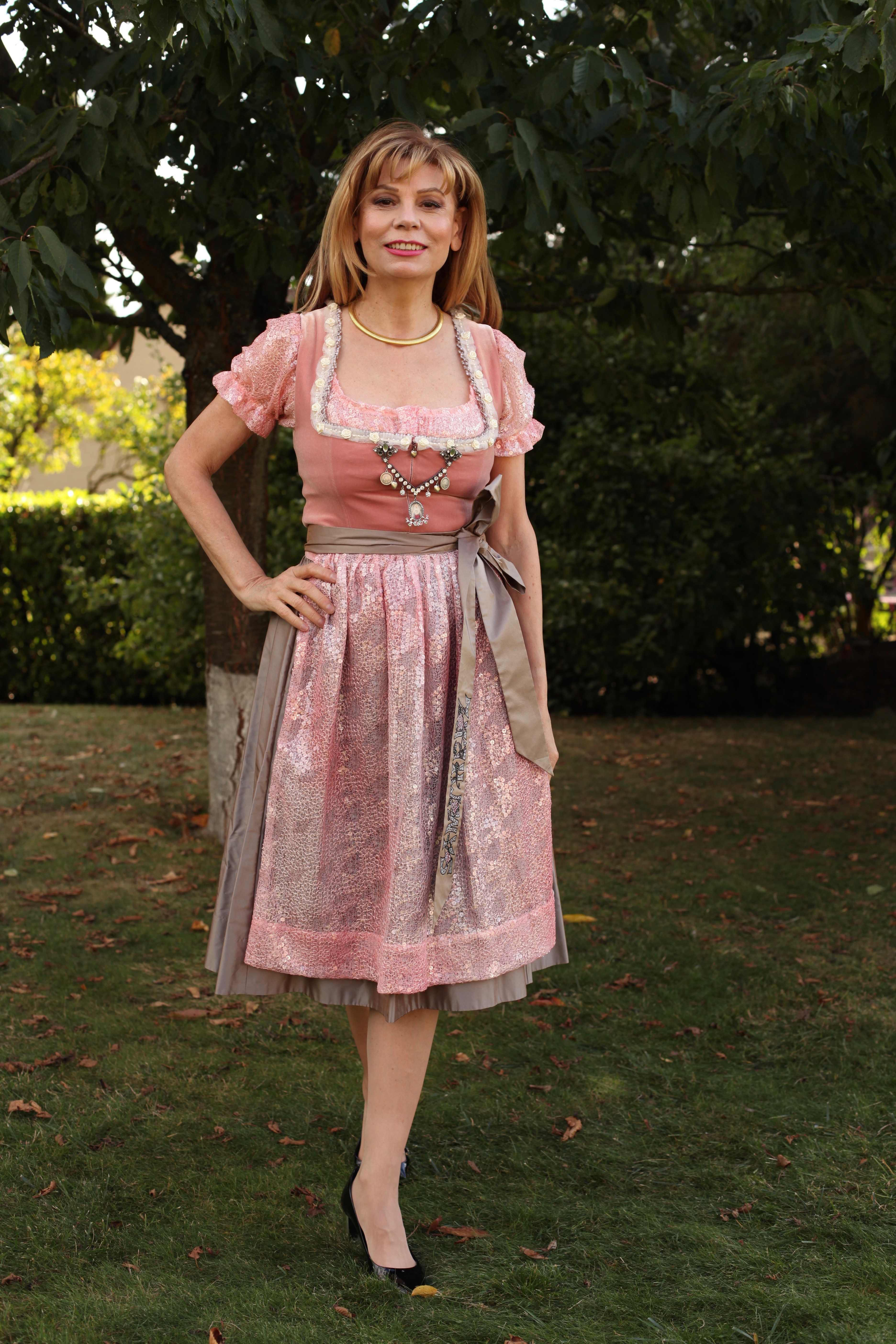 The Most Glamorous Dirndl

A style born in reaction against the more formal and geometric one of her king’s predecessor. And perhaps she would have welcomed the invention of the zipper as featured in the delicate velvet bodice.

No dirndl without accessories! They include earrings, brooches and shawl gathers made of silver, and first and foremost a Chariwari, that is a Bavarian folk costume ornament. Classic hunting charivari for men are composed of animals’ teeth and claws and even a fox nose to be worn on the belt of their lederhosen.

For women, and in particular today, the trend is towards “diamonds for everyone” as envisioned by Daniel Swarovski. Born in 1862, in what is now the Czech Republic, he made crystals affordable. Thus, my velvet bodice is embellished by a chain of Swarovski crystals: attached to it in the middle a medallion and on each side of it a triple combination composed of a coin, a velvet heart and a single Swarovski crystal. Thank you Daniel !

In addition to the charivari I opted for a silk hair ribbon in matching colour. By the way, charivari origins from the Latin term “caribaria” meaning “mess” or “madness”. It came into the German-speaking world during the Napoleonic era. At that time it had a secondary, more important, meaning of “pandemonium” or “commotion”. This meaning has continued in both English and French until the present day. 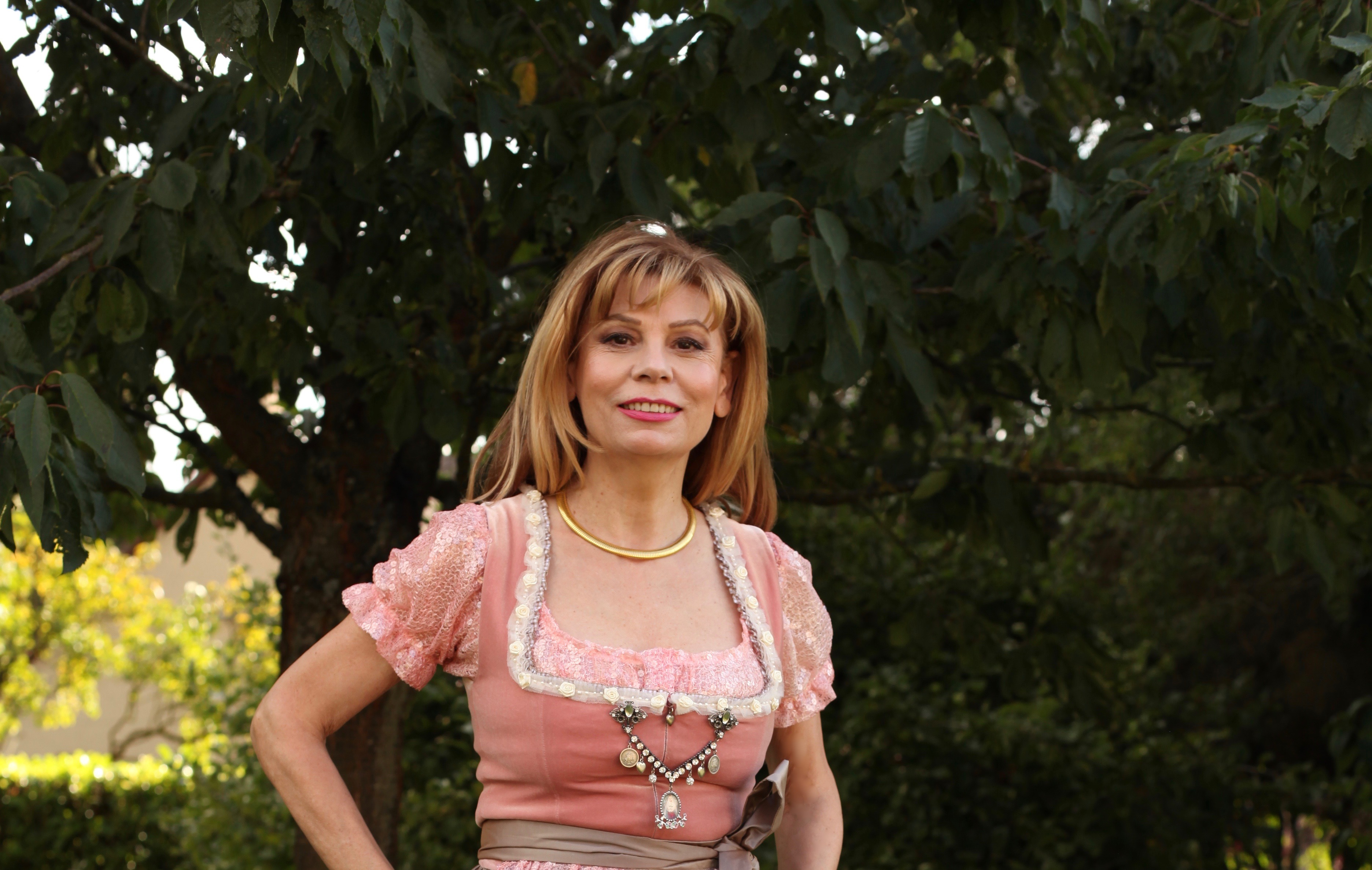 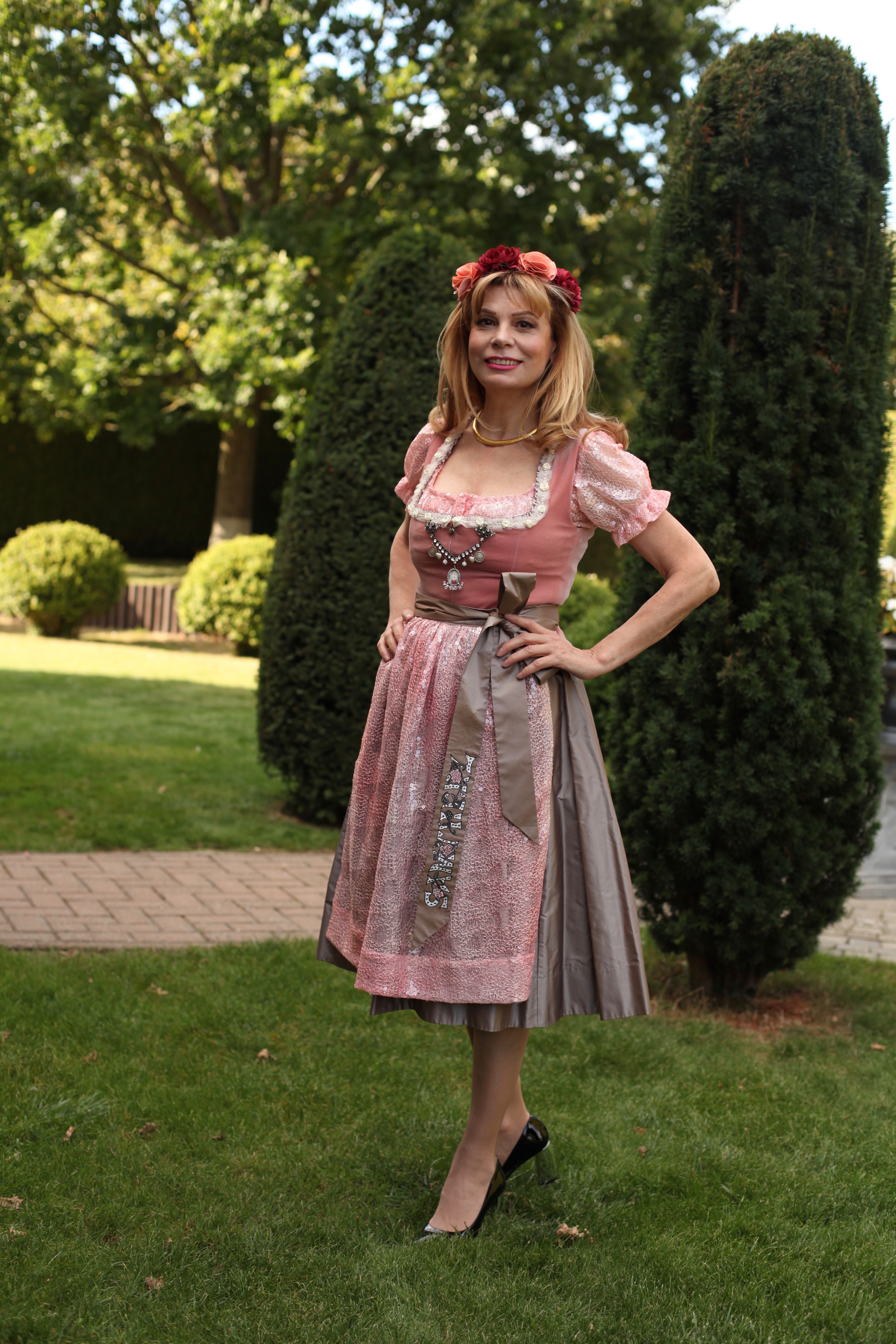 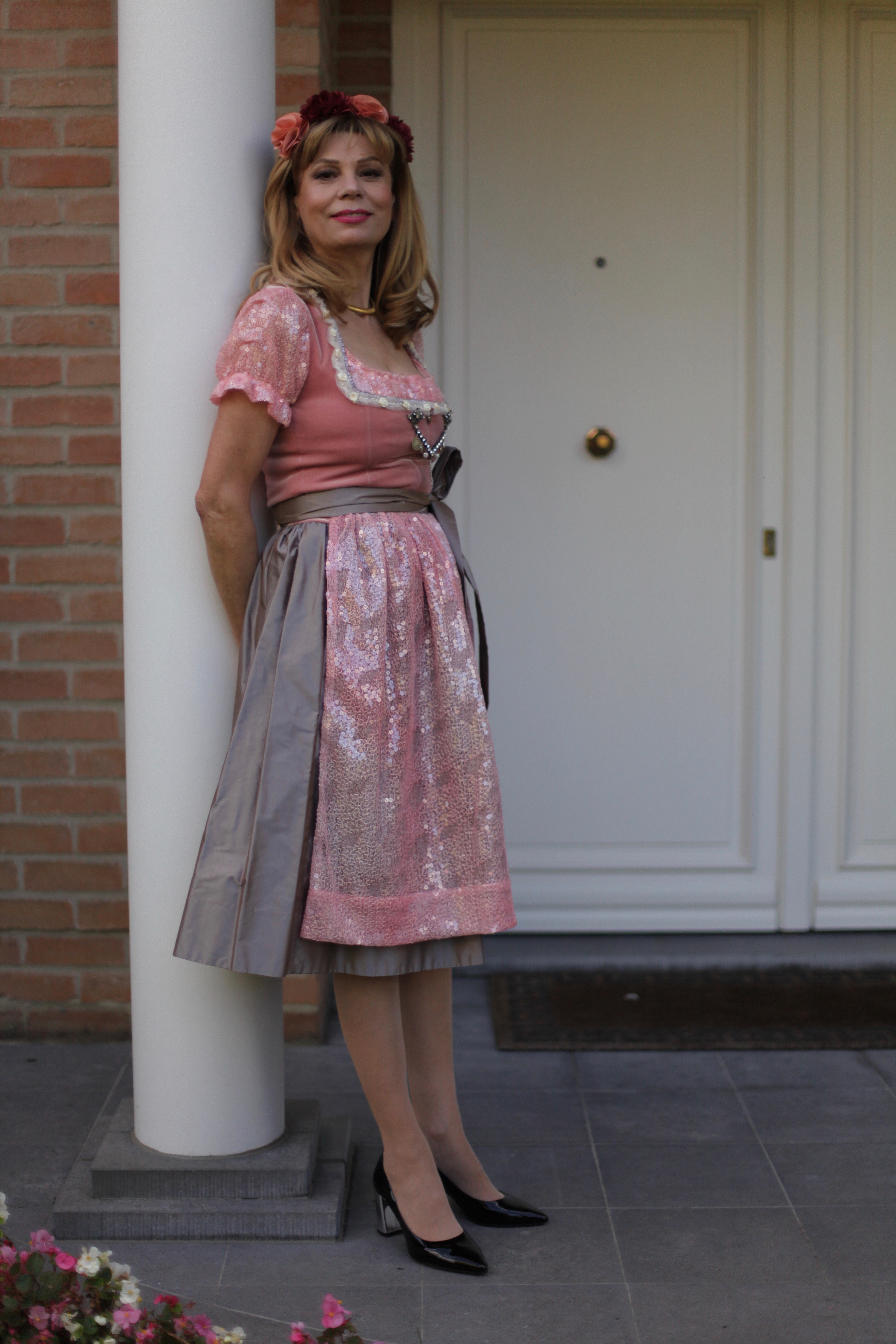 Princess Therese – The Most Fun Dirndl

While dirndl can be worn throughout the year, it is the world’s largest beer festival that brings them out in force. More than six million people flock to the Oktoberfest every year. For sure not to commemorate the wedding of Princess  Therese of Saxe-Hildburghausen with Ludwig I of Bavaria, which took place on this site in 1810 but to party like a Bavarian.

Or what they take for it, and happily dressed in dirndl and lederhosen! Running for more than two weeks from mid-September to the first Sunday in October you will need to hurry-up to join the dirndl craze! The biggest folk festival in the world is calling for a special outfit.

This dirndl surprises with an extraordinary colour combination of violet and blue. It is not just brightly coloured, but also made with classy taffeta fabrics and gorgeous lace. The bodice convinces with a light blue satin ribbon lacing and antique bodice hooks. The white ruffled blouse peeps cheekily above the low-cut neckline, adding to the femininity of this design.

Did you know that in Rococo front or back lacing could indicate the depth of your financial pockets? If you had less money, you laced yourself in the front, if you were Madame Pompadour, a maidservant took care at the back. The lacing was done in a spiral with just one cord which is tied with a knot at the upper and lower end of the corset, not the zig-zagging used nowadays. 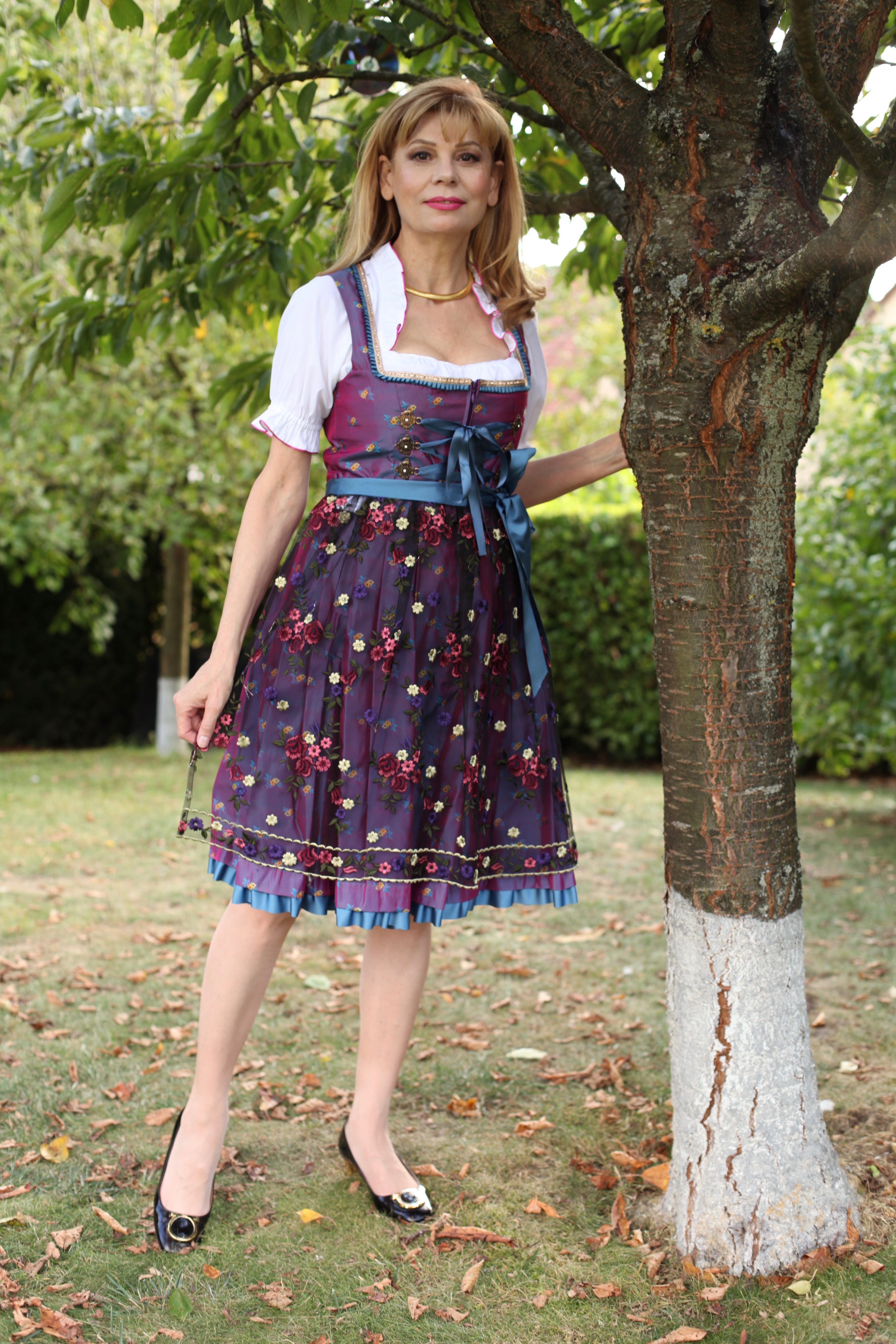 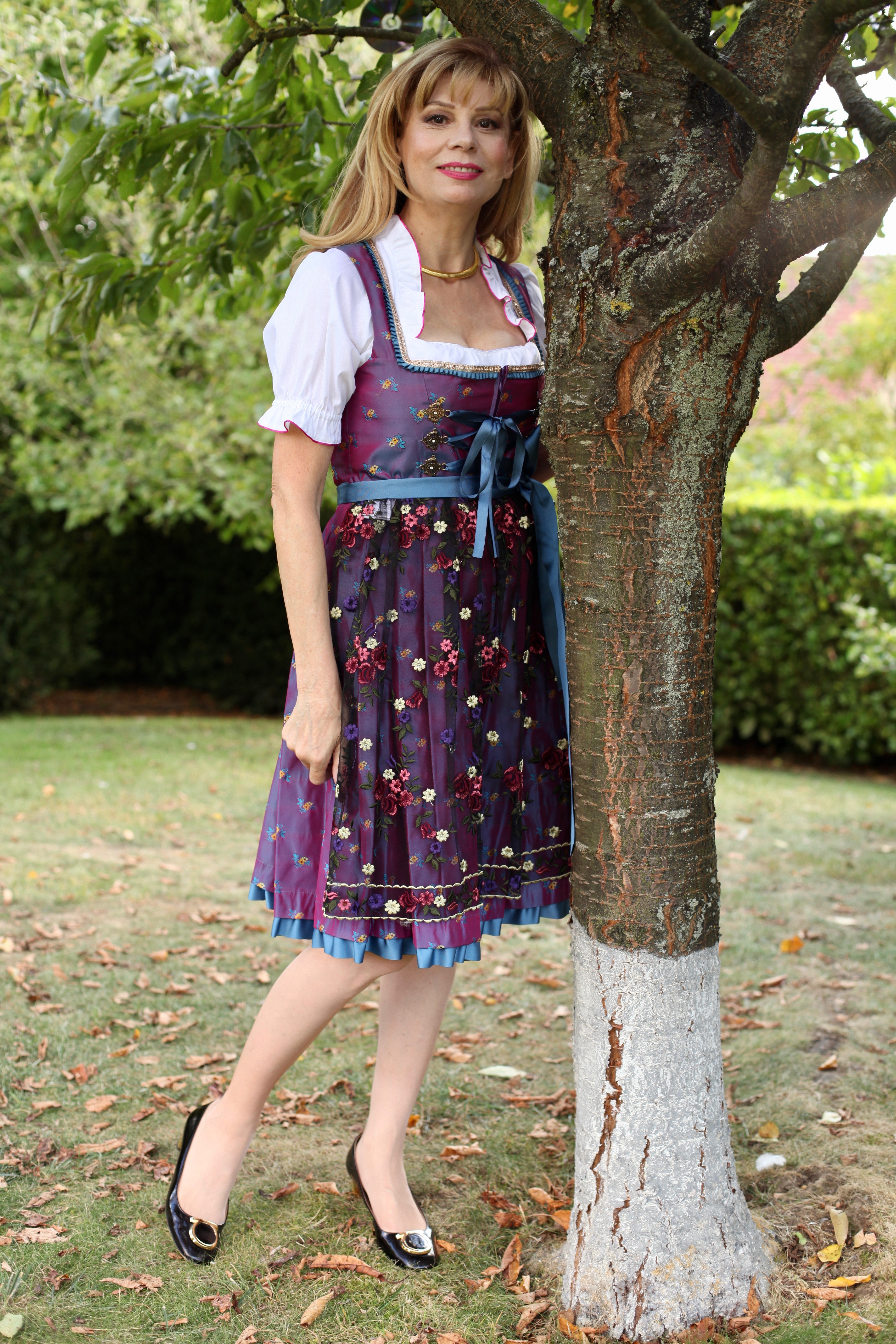 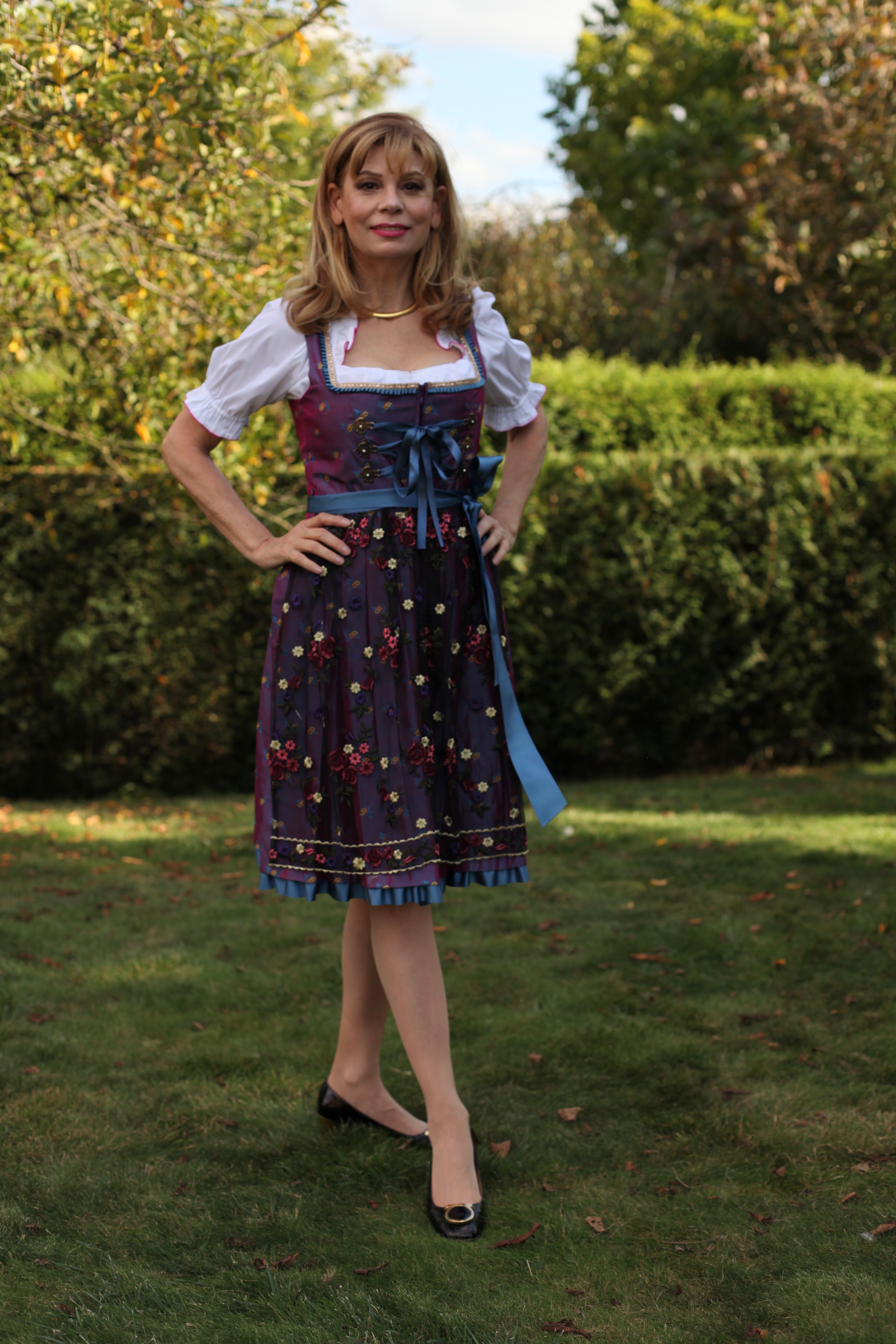 This is not a classical dirndl, but for sure Marlene Dietrich would have loved this one! Pure seductive elegance in a straight forward patterned black jacquard bodice and perfect as a gorgeous alternative to a cocktail or evening dress.

Were you aware that this German actress and singer, leaving Germany in 1930, stimulated demand for dirndls in the United States and beyond? Tabloids showed her spending a summer decked out in traditional dress by an Austrian company that had just opened a store in Manhattan. Since then many celebrities like Paris Hilton and actress Salma Hayek have been seen following Dietrich’s footsteps. Whether worn rock or elegant – if that is not a good reason to wear one yourself, what then?

The black bodice with its stand-up collar looks stylish with the equally black apron and – instead of a white – a transparent blouse beautified with sequins. I team it with a pair of black patent point-toe silhouette pumps set on trendy block heels in silver. 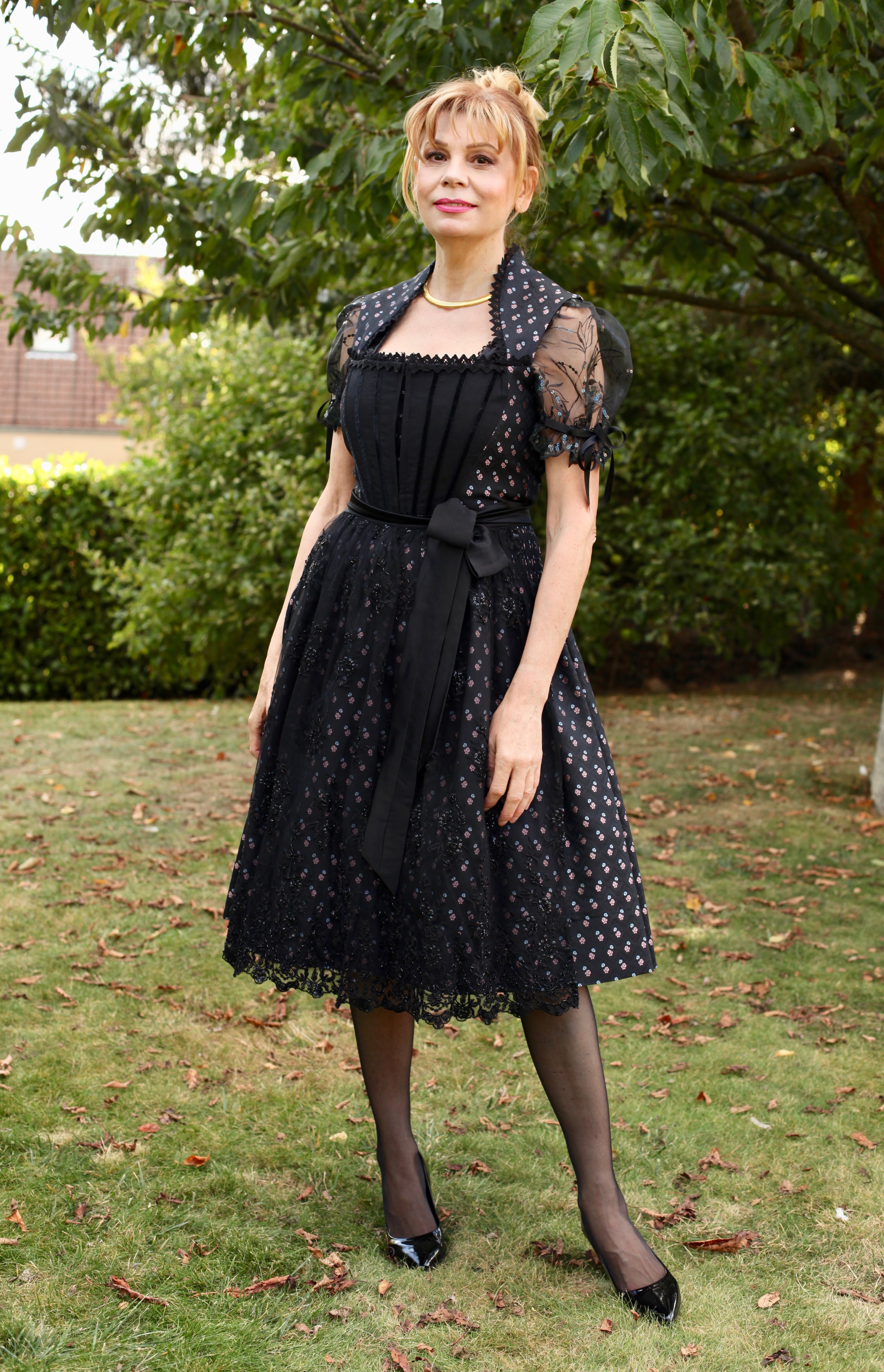 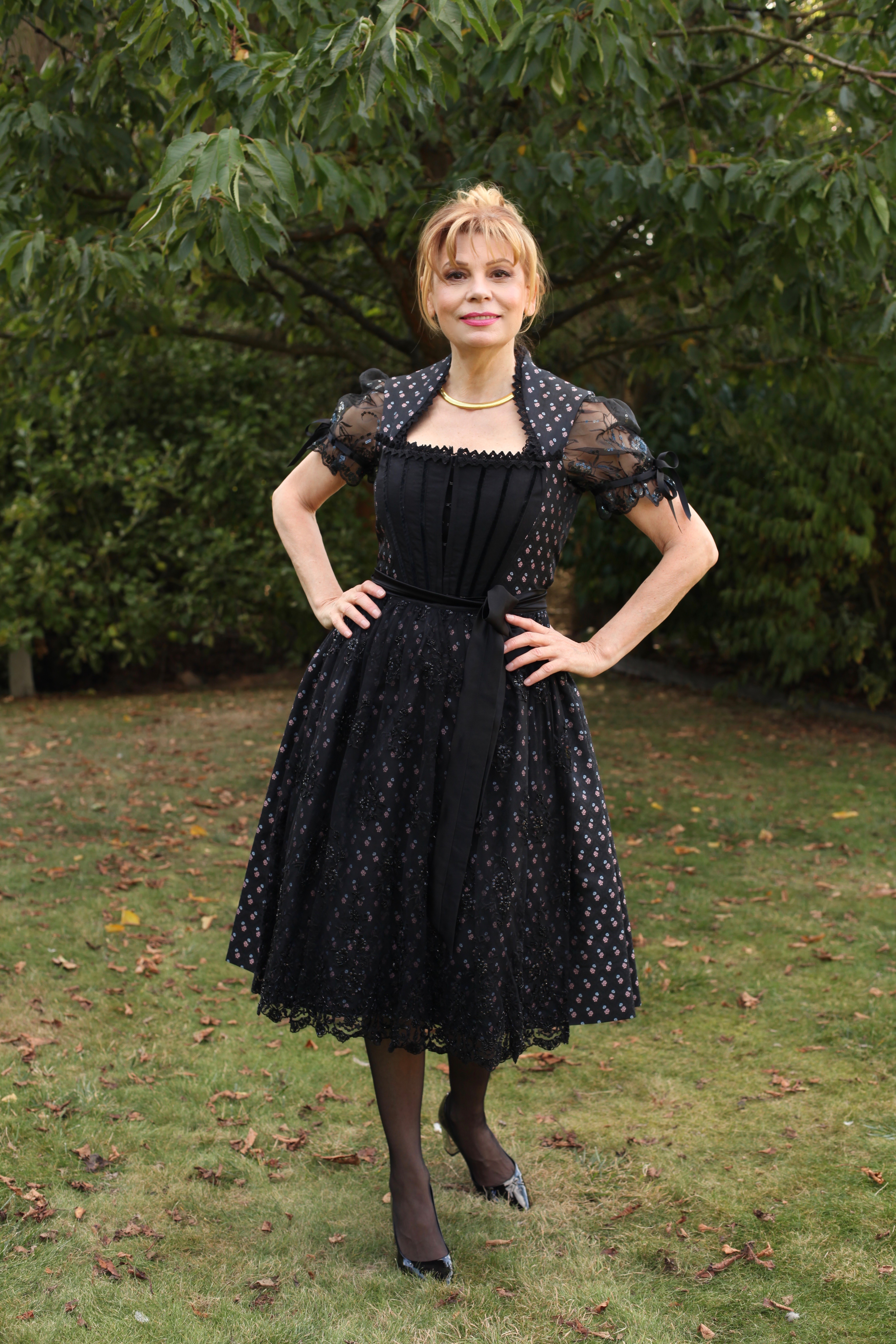 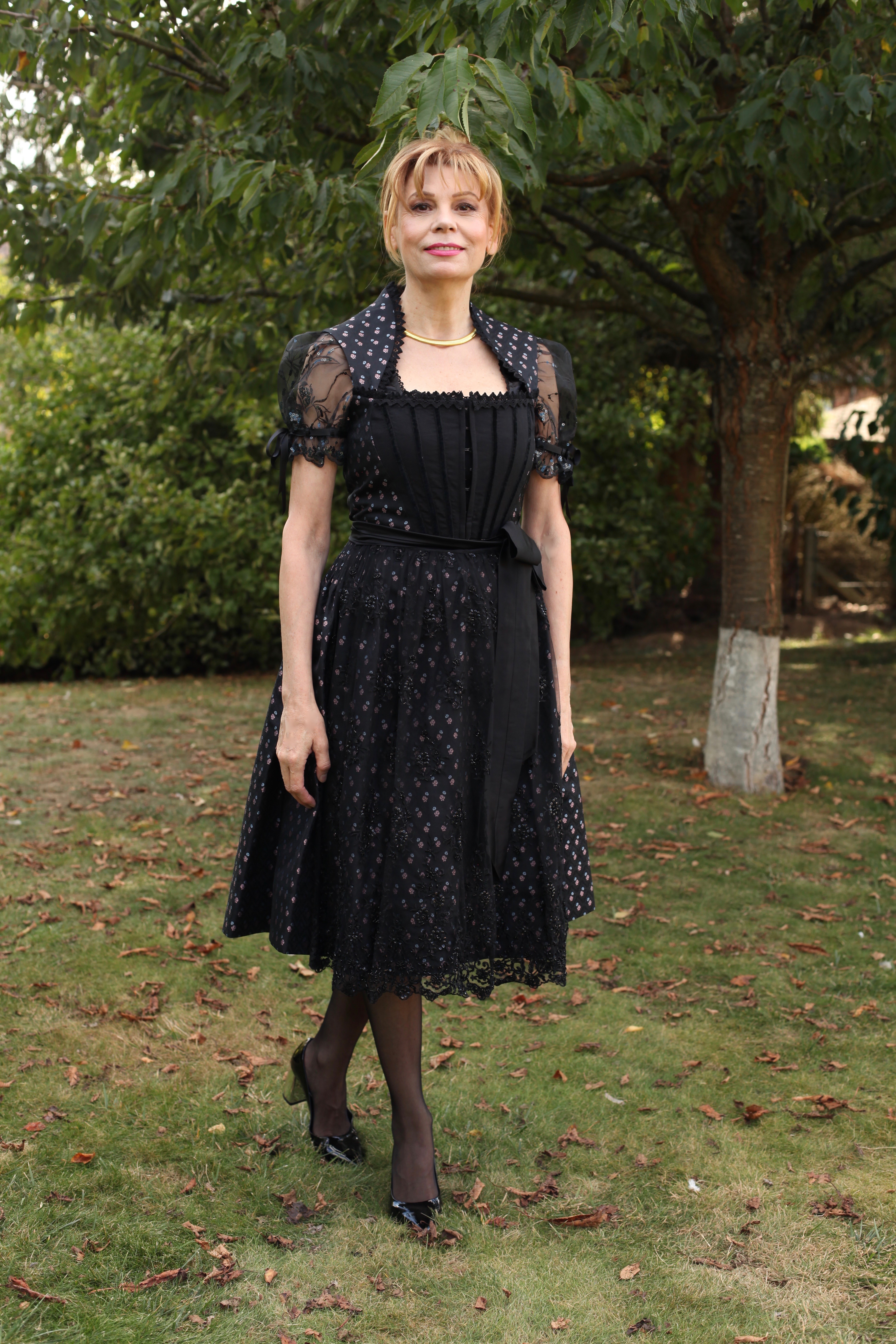 Next month I will share with you some impressions about another craze. The talk will be about shopping!